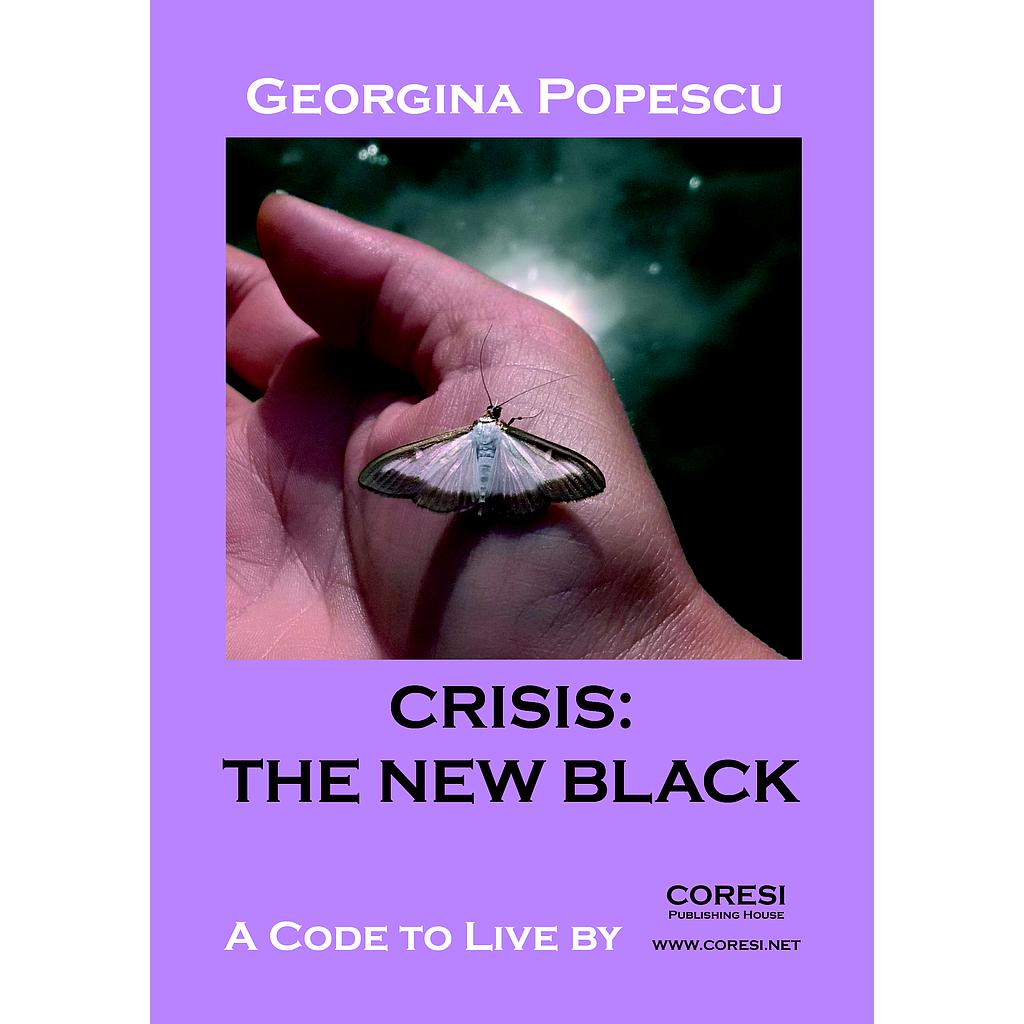 Crisis: the New Black. A Code to Live By

This is how Georgina Popescu introduces herself and her latest book:I grew up happy, healthy and respected, in a beautiful communist country, which most people judge without knowing much about.Professionally speaking, I have been a banker for more than 15 years. And more specifically, a distressed loan recovery banker ever since the crisis managed to hit also the Eastern part of Europe, contradicting (!) the optimistic initial forecasts. Despite the turmoil experienced across more than 15 countries at a certain point in my career, I managed to maintain a sense of happiness, state of health (mental one included) and respect across my peers, in a rather challenging profession.Such graceful survival was possible because of the love, humor and common sense that were floating all around in my family as well as within the larger community of friends and co-workers.Don’t get me wrong……Being happy does not mean that I do not cry my eyes out, grief over the tombs of departed loved ones, burst out in anger or fight like a fierce lioness sometimes……Being healthy does not mean I do not experience regular diseases and a couple of more complicated conditions from time to time… it just means that I have successfully healed from all that and currently my temporary earthly pain points migrate daily to different parts of my body, fact which my grandmother used to interpret as a state of reasonably good health.…And being respected… Well, I’ve had my fair share of curses (even threw some back) and un-invited “compliments” on the street, experienced strikes of envy, rebellion and various forms of being “put down” (or “to my place”), however I do tend to believe that people who act in an offensive way do not disrespect me, but themselves actually… And I have kept my head up high in this process.Right in the middle of my happy, healthy and respected simple life, more exactly in the summer of 2011, while my work took me traveling all around ex-communist Europe, I started to write on my friend’s blog (Peter Gluck’s2 Ego-Out project) some thoughts about the world crisis.The first attempt to explain my perception about its origins was called “Roots”. While writing, I understood that the complexity of what brought humanity to this point cannot be wrapped up in one night, therefore went to sleep deciding to keep on posting at least until reaching the magic number of 10 roots. And then, I would stop for a while whatever challenging professional endeavor, and collect those thoughts in a book, then throw it in the ocean of universal knowledge…Over the next months, while elaborating on the initial idea of root causes of the worldwide trouble, I came to the conclusion that what we experience is actually no longer a “crisis”, but a gradual and complex shift to a new paradigm, the beginning of a New World Order, as it seemed to me that nothing could stay the same as it was before.Almost one year after starting the Roots series, even though I was still far from reaching the target of ten chapters, I started to write in parallel another, a more optimistic, one—the Ways. It came to life as I felt the need to go beyond merely outlining the causes, and explore where we could go from there—by “we” meaning all those people who would neither accept the doomed path not forfeit our life under the gloomy burden of our times.The Ways gravitate around one main idea—the need for education. A complex approach that would cultivate more than technical, economic, legal, artistic, scientific and other theoretically and practically oriented sciences. The men and women of the future urgently need to find a way to learn about morals, integrity, ancestral & contemporary wisdom—the sooner, the better!Georgina Popescu